The Seventh and final color of VIBGYOR : RED

RED governs the BASE chakra situated at the base of the spine.

It denotes Vitality, Courage and Self awareness

It is the aura of survival and stability on earth.  The color red provides the power from the earth and spatially distributes this energy at all levels. It connects us to our physical body. Everything that is to be commenced needs the life vitality of red.

There is something that always baffles me. Its nothing but the knowledge that our ancestors possessed , which is far more advanced than anything modern science knows. I can quote Several examples.

Adi Shankaracharya ( Founder of Adwaita ) is the Father of Particle Physics, says Prof. V Suryanarayana Rao, Chairman of Foundation of Vedic Sciences. Shankara’s diagram in SOUNDARYA LAHIRI of the PADMA (lotus) has been discovered as the source of God Particle by scientists with the recent accelerator experiment when the thousand-petalled lotus manifested while they brought proton in collision with another proton of the same particle. The Sri Chakra with its pinnacle, Mahameru, the tip of the iceberg, is the representation of the entire process of creation, sustenance to destruction with the triangles being the forces of Shiva (pure consciousness/spirit) and Shakti (energized consciousness/matter).

There is ONE PARABRAHMAN (eternal, indescribable, attributeless) which is reflected as the world of MAYA (moving, filled with attributes).  A cosmic creative vibration (called sphota or explosion) arises between Shiva and Shakti called Nada. This Nada then gets consolidated into Shabda Brahman (differentiated sound energy), the universal cosmic resonance, symbolized by Om. From this arises cosmic intelligence that is responsible for the creation. Doesn’t it sound familiar? Yes we are looking at BIG BANG THEORY propounded in the 20th century being explained by a sage of ancient India who lived around 8th century CE.

In Mahalakshmi Ashtakam, a part of Rig Vedic Hymn that dates roughly between 1700- 1100 BC

There is this verse:

Generally people assume this to be sung in praise of Goddess Lakshmi, the giver of wealth. But, on a closer observation this shloka can be read this way :

Doesn’t it remind you of Neil Bhor’s atom model propounded in the year 1915?

It can be inferred that the Vedas of Hinduism had description of an atom back in 1700 BC. 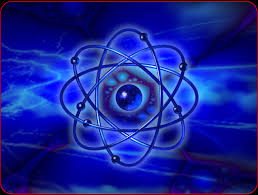 In several parts of southern India, there are a sect of Sages called as SiThars(Siddhas)

There is something that the Siddhas believed and preached.

Which means “our body is a replica of the cosmos.”

Before I explain this previous quote, let me briefly describe who a Siddha is:

Siddha refers to a Siddha Guru who can initiate disciples into Yoga. A Siddham in Tamil means “one who is accomplished” and refers to perfected masters who, have transcended the ahamkara(ego),have subdued their minds to be subservient to their awareness, This is usually accomplished only by persistent meditation.

According to an ancient Tamil poem from the book Choodamani Nigandu, a Siddha  has 8 devine qualities :

Which roughly translates to:

Here, we have these sect of beings who are at the peak of universal awareness by attaining complete awareness of SELF, who  belongs to no religion or caste telling us that the universe and everything it contains is made up of the same thing and is a replica of each other.

Isn’t is what latest advancement in Quantum Physics tells us ? If we dig deeper into the Siddha concept, we can find references of Schrodinger’s paradox and several discussions that relates to Copenhagen interpretation of quantum mechanics.

It’s to these very same doctrines, the concept of CHAKRAS and Kundalini belongs.

That is the Aura that suggests completeness, It denotes a connect between the physical body and higher realms of cosmic consciousness.

Red is the ultimate truth that seals the living.

That brings us to the end of the VIBGYOR series. Wait, it’s not over yet…..

The epilogue is yet to come…..

4 thoughts on “Exploring the realm of AURA :Red”